The cultural history of material objects can reflect events and industrial processes in unexpected and interesting ways. They were often created to cater to specific social trends or phenomena, became part of the fabric of everyday life, but then disappeared almost as quickly as they appeared, to be replaced in turn by improved versions and styles.

The bar lip decanter is one such object, and its history offers a fascinating glimpse of the social and economic development of America's first 100 years, as well as the evolution of glass manufacturing in this country. It appears that the bar lip decanter was an exclusively American form. While catalog illustrations confirm that they were manufactured elsewhere, foreign-made examples appear to have been specifically made for export to the US , as bar lip decanters do not appear to have been used elsewhere in the world

The 1830s witnessed radical changes in the interior design of bars and saloons. The traditional layout had placed the keeper "behind bars," in a caged area with an opening to the taproom, to protect him and his inventory from unruly customers. However, as bars became more open, the ironwork disappeared and shelves were fitted to a wall behind the tender's back for displaying his range of liquors. 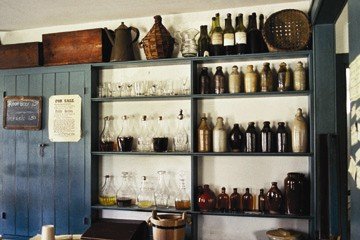 Bars and saloons continued to store large quantities of liquor in barrels, but a means was required to house liquor at the counter in a manner that helped project a suitably refined image. Pottery stoneware jugs were old fashioned and suffered practical disadvantages. 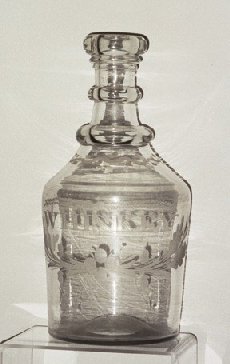 Engraved Decanter This blown decanter has engraving that appears to related to other engraving from the Pittsburgh/Wheeling area from the period.

Newspapers began to describe some as "drinking palaces," with long rows of decanters behind the bar. On the other hand, sleazy bars and saloons were referred to as "barrel shops" because they still poured directly from barrels , not decanters.

With most liquor during the period remaining colorless, sophisticated establishments would have required decanters of differing shapes, sizes and designs to assist the bar tender in identifying specific brands. Blown molded and engraved bar lip decanters first appeared between 1830-1840 to meet this specific need.

By the late 1850s the blown decanters were being replaced by pressed versions in numerous patterns and sizes.

The bar lip decanter enjoyed a heyday spanning just 45 years, between circa 1830-75, during which decanters in countless patterns, shapes and sizes, were being manufactured by dozens of American glass houses. Two factors, one technical, one sociological, combined to cause its ultimate demise.

The first technological advance was the development of lime-based glass, which was around sixty-percent cheaper to produce than lead-based equivalents. The increased workability of lime glass allowed more efficient manufacturing methods and encouraged the introduction of cheap, labeled bottles. 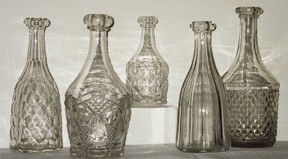 The associated cultural change was rapid "nationalization" of American drinking preferences. Soldiers who had traveled the country during the Civil War returned home having newly acquired tastes for particular brands that had previously been unknown in their hometown or state. The smoother and more flavorful liquors developed by some distillers, notably in the south and east, proved particularly popular. Early Times (1860) and Jack Daniels (1866) are only two of several brands established at the time of the civil war and reconstruction. Bar owners were quick to recognize the commercial potential that "added value" brands brought to their business, and the explosive expansion of the railroads provided the routes of national distribution.

Advances in bottle-making technology encouraged the manufacture and the distribution of new "branded bottles" embossed with the type of the liquor, or branded and decorated with logos identified with specific brands. The first "bar bottles" appeared in the McKee catalog of 1871, and within four years bar lip decanters had all but disappeared from glass catalogs.

Bitters-sized decanters survived longer as they were adapted for use as sauce bottles, with examples illustrated in catalogs into the early part of the 20 th century. 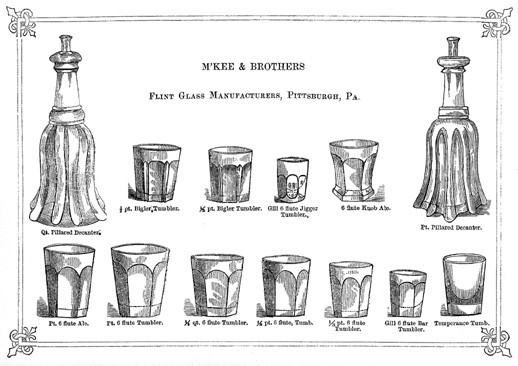 Page from the 1871 McKee & Bros. catalog showing decanters and tumblers.